The main tasks Meshcheryakov Laboratory of Information Technologies (LIT) are: provision of the Joint institute for nuclear research (JINR) and JINR Member States with high-speed telecommunication channels; support and development of the distributed high-productive computer infrastructure and provision of informational and software support of the scientific and industrial activities of the Institute. Komplesny approach to the solution of these tasks has led to create in 2016 of the project of the Multifunctional Information and Computing Complex (MICC) is aimed at ensuring the further development of the network, information and computing infrastructure of JINR in accordance with the JINR Seven-Year Plan of development for 2017-2023.

Now MICC is one of the basic facilities of the JINR. It provides a 24x7 fulfilment of a vast range of competitive research conducted at JINR at a global level. MICC consists of four key components: Central Information Computer Complex (CICC), grid-infrastructure, computing cloud of JINR and HybriLIT high-performance cluster of parallel calculations. All these components lean on powerful network and engineering infrastructure.

The JINR grid-segment developed on the CICC basis is an important element of grid-infrastructures RDIG (Russian Data Intensive Grid), WLCG (Worldwide LHC Computing Grid) and EGI (European gridinfrastructure), it provides support for virtual organization of international projects, including those at the LHC (Large Hadron Collider). Now two GRID-sites are created: the resource center of the Tier-1 level for an experiment CMS and the resource center of the Tier-2 level for experiments of ATLAS, ALICE, CMS, LHCb, STAR, BES, COMPASS and others.The JINR grid site has not only a leading position in Russia, but is also among the top ten Tier-2 grid sites in the world. A distributed training research grid-infrastructure is developed at LIT to educate students and specialists that is represented by popular modern techniques of distributed calculations.

The Laboratory has implemented a cloud computing system that provides increased hardware utilization through virtual resource sharing and is necessary to fulfill JINR obligations in various research projects (NICA, ALICE, BESIII, NOvA, Daya Bay, JUNO, etc.). The resources of the Russian Economic University named after G.V. Plekhanov, the Institute of Theoretical Physics named after N.N. Bogolyubov (Kiev, Ukraine) and the Institute of Physics (Baku, Azerbaijan), etc. are integrated with the JINR cloud now, and integration work is underway with the European cloud infrastructure EGI Federated Cloud.

Global trends in use of hybrid computing architecture for carrying out massive and parallel scientific resource-intensive calculations have led to creation of the heterogeneous educational and testing HYBRILIT ground. Putting into operation in 2018 of the supercomputer of N.N. Govorun, our talented scientist, who created the Laboratory of Information Technologies together with M. G. Meshcheryakov, became a new stage of development of the heterogeneous platform. The Supercomputer is a joint project of the Bogoliubov Laboratory of Theoretical Physics and the Laboratory of Information Technologies under support of the JINR Directorate as well as specialists of the RSC Group, the Intel corporation, the NVIDIA company and IBS Platformics.The project is aimed to radically accelerate complex theoretical and experimental studies in the field of high energy physics, nuclear physics, condensed matter physics etc. underway at JINR. This supercomputer ranked 9th in the international ranking. A large number of scientists from Russia and other countries are already working on it, simulating nuclear processes, which will be studied experimentally at the NICA collider.

Mathematical support of experimental and theoretical research conducted in JINR LIT includes research on the advanced level in computational mathematics and physics. The aim of these studies is the development of mathematical methods, algorithms and software packages for numerical and symbol-numerical simulation of physical processes and quantum systems oriented to the heterogeneous platform HYBRILIT, and also processing and the analysis of experimental data with use of the latest computing hardware resources of the Laboratory. Also, much attention is paid to the development of task management systems (preparation and analysis of experimental data, modeling, etc.) with a scalable and flexible architecture that provides ample opportunities to adapt the system to changing computing resources, storage systems and network resources.

At present 322 employees work in LIT departments (2018). Among them are 7 professors, 25 doctors of science, 66 candidates of science. 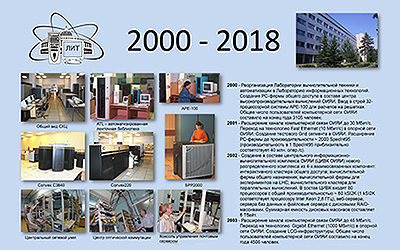